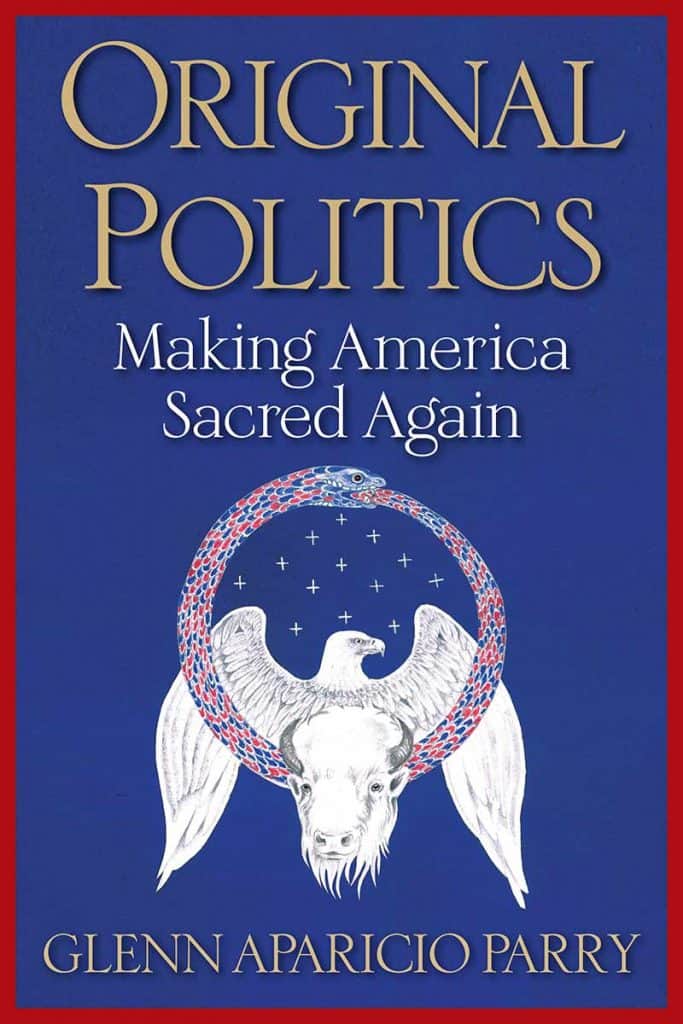 To recreate a whole and sacred America, it is important to piece together the forgotten fragments of history that are currently keeping the country divided. Just as a traditional Native American potter begins a new pot with shards of old pots— honoring the ancestors, bringing the energies of the past into the present— Original Politics re-constellates the nation as a whole out of the seemingly disparate shards from our origins. The most significant forgotten piece is the profound effect Native America had on the founding values of this nation.

Original Politics convincingly demonstrates how the best aspects of the founding vision of America were inspired, or directly appropriated, from living, Native American cultures: concepts such as natural rights, liberty, and egalitarian justice. Further, Parry traces the influence of Native America not only on the founding fathers, but on the ‘founding mothers’ of the 19th century women’s movement; as well as the 19th century abolitionist and modern ecological movements.

Native America has inspired what Parry sees as the sacred purpose of the nation: bringing all the world’s peoples together on one soil in a harmonious cultural mosaic of unity in diversity. While there have been periodic setbacks (devolution) in our nation’s history, including today, these only serve as catalysts reigniting our sacred purpose. America is creating a new melting pot, and like the original vision, it will be a creation from the many into the one—only this time it must not leave anyone out. This includes the natural world.

Original Politics is ultimately about respecting all forms of life and all forms of political expression as different aspects of one whole. It is a reclamation project that brings people, land, and nation together as one. The overall effect of the book is profoundly healing.

“In this brilliant work, the author takes a hard look at the confusion and anarchy of the current American political landscape, a divided nation, the Trump administration, the birth of the modern Democratic and Republican parties and the historical influences on the politics of gender and race relations and the environment.”
Carole Claps, Chicago Tribune
Read the Full Review

“For peace and harmony to prevail, the truth must be told. We are instructed never to take hope from the people.”
– Oren Lyons, Faithkeeper of the Turtle Clan of the Onondaga Nation, author of Exiled in the Land of the Free: Democracy, Indian Nations, and the US Constitution.

“Some people are aware of the impact Native cultures had on the development of the US. The vast majority are not. Original Politics finds a unique way of telling the true story.”
– Harlan McKosato (Sac and Fox Nation), is the former long-time host of the nationally syndicated radio show Native America Calling

“Parry’s richly-textured book holds out hope and guidance for this moment of political conflict over diversity amid fear for the continuation of life on the planet.  Inviting us to see how this challenge is the stimulus to transform the conflict into unity of purpose, the author provides us with a roadmap for how to do it through a new worldview that reestablishes an Indigenous connection with the natural world. This worldview privileges place over time, relationship over product, and revalues the feminine, enabling us to rebalance culturally and ensure the survival of life on the planet.”
– Sally Roesch Wagner, founding director of the Matilda Joslyn Gage Foundation, and author of Sisters in Spirit: Haudenosaunee Influence on Early American Feminists and The Women’s Suffrage Movement.

“Thank you, thank you, Niawen (in Mohawk), K’olabal (in Maya Tzotzil), muchas gracias, merci beaucoup, to you. If all “white” people held such a deep consciousness for Natives as you do, the world would already be truly blessed and sacred.  There is no way one can say neutral when reading you, I’m crying, I’m touched, shaking & totally stirred up!!! This is all so good in spirit.”
– Ohki Simine Forest (Canadian Mohawk), author of Dreaming the Council Ways, is a vision-holder and spiritual teacher.

“In a fractured time when a rude politics of nationalism rides in the high saddle as the climate crisis and many other environmental problems demand effective international co-operation, the world needs Glenn Aparicio Parry’s Original Politics: Making America Sacred Again.  Engagingly written, mixing the best of the past and present, the indigenous and immigrant, appreciating everyone’s beauty: that is how we forge a sustainable future. Parry traces a path. Life on Earth will be better if everyone –everyone, regardless of race, religion, and class – re-learns what many indigenous ancestors call “the original instructions.” Read this book, enjoy it, and pass the word: we cooperate, or we face a hot, miserable future world squabbling over toxic crumbs.”
– Bruce E. Johansen, author of Forgotten Founders: How the American Indian Helped Shape Democracy and The Iroquois: The History & Culture of Native Americans.

“In a brilliant historical retelling, Original Politics makes clear that America’s sacred legacy—while appearing to have fallen in the ditch of a crude and phony populism— is destined to be a thriving pluralistic democracy and a sanctuary of ecological values.”
– James O’Dea, former president of The Institute of Noetic Sciences, author of Cultivating Peace and The Conscious Activist.

“Original Politics: Making America Sacred Again points the way for the nation to recover its spiritual heritage by summarizing the Indigenous precepts informing the western hemisphere at Contact.  I highly recommend this book to persons desiring a synopsis of Native epistemology in order to rediscover the sacred nature of the earth and its peoples. Original Politics is a timely and thoughtful approach to solving America’s political and social problems.”
– Betty Booth Donohue (Cherokee Nation), author of Bradford’s Indian Book

“The arrival of Original Politics into our current tormented and divisive U.S. political field is an exceptional gift. Glenn Aparicio Parry offers us a way through the maze, untangling the tight knots of dread, fear and outrage along the way by illuminating the larger and deeper vision of America’s political life in the context of its destiny to embody ‘unity within diversity.’

In this luminous work, even in the midst of such brutal political dismemberment, we are encouraged, through Parry’s measured, insightful and practical guidance, to hold faith towards ‘making American sacred again.’ This is a book you will read in one sitting. Its unveiling of the deeper meaning of America’s political journey, while sobering, is also completely galvanizing, educational, and heartening. I encourage you to get a copy without delay.”
– Thanissara Mary Weinberg, author of Time to Stand Up, A Buddhist Manifesto For Our Times, North Atlantic Books.

“In Original Politics, Parry draws on his lifetime of work in association with Native scholars and teachers as the lens through which he considers both the current polarized and dysfunctional American political situation and the coming global environmental catastrophe. Parry gently suggests that our public business, our politics, can only change when we return to the spiritual, caring values that characterize the way Native people see their purpose in life regarding nature: as guardians and caretakers, not as masters, users or exploiters. These concepts were inherent in the principles the founding fathers appropriated from Native American tribes whom they lived and worked with…principles from which we have allowed ourselves to stray from at our peril.”
– Senator Gerald P. “Jerry” Ortiz y Pino, New Mexico Legislature

“Aparicio Parry’s Nautilus award-winning book Original Thinking was an important work that revisioned Western philosophy to its original roots. Original Politics builds upon his first great work by examining the cultural narratives that shape our politics and current social systems, asserting that our political future must include the sacred principles that lie within its past, and original, foundations. He argues that though the original constitutional principles borrowed much from the Iroquois Confederacy, the founding fathers omitted crucial principles—and that those fatal omissions shape our greatest problems today. This book strikes at the heart of this American illness—a shadow dangerously personified in the current administration—a shadow that forces this nation to face itself, to ask important questions, and to search its own historical conscience for a more caring, just and lucid national vision. Destined to be historically significant, Original Politics advocates a political future in which Indigenous wisdom heavily influences our path forward—a path into a sacred politics that once again values quality of life for all living beings. I hope that as many people as possible read this book soon. So much depends upon its message.”
– Julie Morley, author of Future Sacred: The Connected Creativity of Nature

“Original Politics: Making America Sacred Again is an important and timely book for helping the United States move beyond its current crisis. Parry’s writing flows beautifully and thoughtfully, as he shows how returning to the nation’s mix of Native and European roots can effectively meet its current problems and heal its divisions.”
– Stephen Sachs, author of Honoring the Circle: Ongoing Learning from American Indians on Politics and Society, with Bruce Johansen, Betty Booth Donahue, Donald Grinde, et al.

“Original Politics: Making America Sacred Again is an interesting and provocative examination of the diverse ideas that created the U.S. government and subsequent concepts about equal rights and the need to respect our environment.”
– Donald A. Grinde, Jr., Professor of Transnational/American Studies, SUNY Buffalo and author of Exemplar of Liberty: Native America and the Evolution of Democracy (with Bruce Johansen).

“If you value the light of democracy and the founding promise of America, Original Politics is a must read. Neither left or right, Parry moves us beyond the polarized politics of today into a future where love and liberty rule.”
– Bill Pfeiffer, author of Wild Earth, Wild Soul: A Manual for An Ecstatic Culture

“Parry addresses the topic most dear to my heart  – the future that we can and must build, a future that heals our brokenness. Never before have I read a history of America that linked Europeans and indigenous Americans except as mortal enemies. The soul of the book is contained in Ramana Maharshi’s response to the question how should we treat others? “There are no others.” These are life-changing words! I feel I’ll have to sit with them in meditation every day from now on.”
– Robert C. Koehler, award-winning Chicago “peace journalist,” author of Courage Grows Strong at the Wound.

“Aparicio Parry takes us on an amazing reflective journey from our founding to our present-day politics, recognizing the contributions of the original peoples of our land to our constitution and founding principles.  He goes on to analyze our current age of chaos through a brilliant spiritual frame that explains the unitive and divisive forces at play and which increases our appreciation for the process that we are in and must go through. His brilliant and insightful connections across centuries entertain and delight us.  While he provides reason to be worried, he leaves us hopeful and more prepared to navigate our future, restoring faith in the transformation that is unfolding.”
– Mino Akhtar, community organizer and peace activist, author of the forthcoming Becoming Muslim in America.